Did you know about St. Albans Rocks? Well I didn’t but I do now! When chatting about the 125th Anniversary afternoon street party it was mentioned to me that it was hoped that there would be enough things for the children to do. My youngest grandchildren had been painting small rocks at home and I knew they had some over so I put my hand up to do some rock painting. Having never done it before I thought it can’t be that hard! So duly armed with 30 washed small rocks, paints and brushes from Victoria Duxbury’s craft box I set up my table on the afternoon. Emilia was the first to do one of a rainbow and there followed two hours of messy fun.
All thirty of the rocks were painted by children from the ages of two – twelve. I had a wonderful time, had amazing conversations with everyone, meeting local children with either their dad, mum, grandad or grandma. Things got a bit messy at times but it didn’t matter. I asked them to paint something that reminded them of God’s creations. One little girl painted a funny face with a tongue hanging out and told me that she thought God would have a good sense of humour. We had a bee, a starry night, rainbows and lots more. 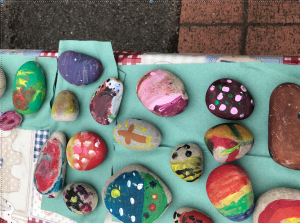 At the end of their time with me I asked if they would leave their rock with me because I would like to take them home and varnish them. I would come back in a few days and leave the rocks in the Church garden so when they were next passing by they would be able to collect their rock.
I took them home but before varnishing them I wrote on everyone of them ‘Hatfield Road Methodist Church – 9.6.2019’. I duly took them back to Church and placed them in two spots in the church garden nearest the Church building.
Can you imagine my surprise when I walked along the path the following Sunday and not one rock was there. They had all disappeared. I couldn’t understand it as I knew that it was not possible for all of the children to have been to Church during the week to collect theirs and in fact two of them were my grandchildren’s and they hadn’t collected theirs yet!
On asking around, folk said that they had seen them but they were not there for long! I then learnt of St. Albans Rocks – rocks are painted and then hidden in public places for children to find; they then would take them away and hide them somewhere else. In fact it need not be in St. Albans it could be anywhere. I was told there is a Facebook page called St Albans Rocks and sure enough there are pictures of children finding painted rocks and then hiding them somewhere else. But no pictures of our rocks.
So if you know of any child who painted a rock with me on that Sunday and would like to have it now. I am sorry I really don’t know where it has gone but I hope it is spreading a lot of God’s love as it is being hidden around St. Albans. You never know, someday it may find its way back to the Church garden along with someone else’s.
ST. ALBANS ROCKS!!!
Jackie Vivian
Share