We gathered on a very murky, misty and mizzly morning in the Verulamium Museum car park.

The intention was to walk through the Gorhambury Estate but a quick Google check showed the drive to be closed that Saturday. A swift change of plan ensued and we did the Ver Valley ‘Two Cities Walk’ instead. The two cities are, of course, Roman Verulamium and St Albans. Walking up the hill to the corner where Blue House Hill meets King Harry Lane afforded beautiful views back across the site of Verulamium towards the Abbey, the tower of which is constructed out of Roman bricks recycled by the Normans 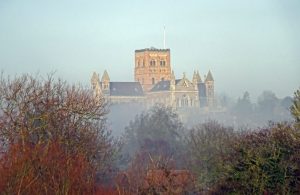 We followed the line of the city walls which run along King Harry Lane and round to the remains of the London Gate into the Roman city. Following the Ver we continued to the Watercress Beds and then meandered back through Victorian St Albans to the Abbey where hot coffee was much appreciated in the newly refurbished café. So much local history is to be seen in a 4 mile walk.