Today (4th May) marks one year since I interviewed for the post of Children and Families Worker for Marlborough Road and Hatfield Road churches. In some ways a lot has changed but in others very little has been able to happen due to restrictions and lockdown. Nevertheless, I thought I would share a bit of what I have been up to over the last few months.

In my first few weeks of being in post I was fortunate enough to be able to go and meet some of our church families in their gardens. With the colder weather and then of course lockdown this was no longer possible. To make sure our families did not feel forgotten, I have been keeping in touch by any means possible: texts, phone calls and emails on a fairly regular basis. Just our way of saying we are thinking of them and offering support where we can.

As I am sure has been the case for many working from home or trying to run children and youth groups, we have

relied upon zoom. As we did just before Christmas, we did Sunday club/Junior church online each Sunday morning, one session for those in primary school and another for those in secondary. Over the weeks we followed a series exploring the Psalms and how so many emotions are expressed within the lines. Something I thought was very appropriate as many people struggled with the restrictions. One of the photos below shows the outcome of one of our activities where young people were challenged to recreate an image from the Psalm using things they have around their homes.

I have continued to meet with some of the young people from our churches who have recently gone off to university once a month. Our time together has consisted of sharing what has been going on in our lives, how studies have been going and if there are any prayer requests. For the first few months of the year I attempted to start a youth group for those in school years 10-13, once a month via zoom. However, this wasn’t successful, I think mainly because many people are getting a bit tired and fed up of looking at computer screens. However, I am not one to give up easily and we will revisit this idea in the Autumn, hopefully when we can meet in person. 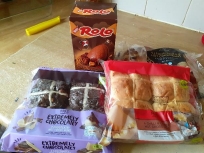 and the assemblies I had recorded for them just before Christmas. Fleetville gave me an opportunity to do another assembly before the end of the last term. This one was also pre-recorded via zoom and explored some of the similarities and differences between Passover and Easter, fitting in with what some of the pupils had been looking at in their lessons. I was also invited to do an assembly alongside a member of staff at Oakland Primary. This one was done in the school playground (fortunately the weather was on our side). This assembly was similar to the one I did at Fleetville, but focused on the different foods eaten in association with the festivals. The staff and children seemed to really enjoy the assembly and after all, who doesn’t love food. The photo shows some of the props I used in talking about Easter.
I am hoping to do a virtual tour of Hatfield Road for the pupils at Fleetville Junior in the next few
weeks and I look forward to developing the links and relationships with the schools over the coming
months.

As I did before Christmas with Advent calendars, I spent some time in the run up to Easter putting together some 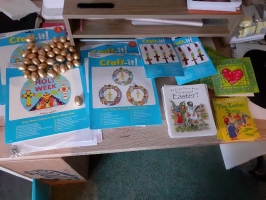 special packs for our families. Unfortunately, due to the restrictions that were in place at the time, I wasn’t able to deliver these in person but they were gratefully received. The photo shows the contents in each pack, including: a couple of crafts (a wreath and story wheel for children in primary school and a keyring craft for those in secondary school); an Easter card; an Easter story book for very young children and very importantly, some chocolate. This was an attempt to encourage the children and young people to spend some time away from screens and also to remind/teach them about some of the events which took place in the final week of Jesus life. Some of the children and young people were very happy to show off some of their efforts when we were able to meet in our church buildings on Easter Sunday.

I think this very much covers what I have been up to in recent months. It has been very strange and in many ways challenging to develop relationships with our families and start groups under restrictions but I am still very much looking forward to what we might be able to do during the summer and in the next term when we can hopefully meet in person. Plans are already underway for some new activities, including a holiday club which will hopefully take place in the October half term.

As a church we remain thankful for the generous funding from the Joseph Rank Trust, the Herts, Beds and Essex District and the St Albans and Welwyn Circuit.