2 In those days Caesar Augustus issued a decree that a census should be taken of the entire Roman world. 2 (This was the first census that took place while Quirinius was governor of Syria.) 3 And everyone went to their own town to register. 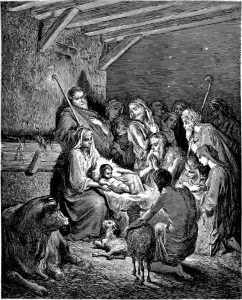 4 So Joseph also went up from the town of Nazareth in Galilee to Judea, to Bethlehem the town of David, because he belonged to the house and line of David. 5 He went there to register with Mary, who was pledged to be married to him and was expecting a child. 6 While they were there, the time came for the baby to be born, 7 and she gave birth to her firstborn, a son. She wrapped him in cloths and placed him in a manger, because there was no guest room available for them.

This telling of the birth of Jesus contrasts with the opening verses of Matthew’s Gospel where the full lineage of Jesus is giving tracing his family back through the line of Joseph back to Abraham.

This lineage is clearly important to Matthew and Luke as they establish who Jesus is.

Both accounts seek to demonstrate that Jesus is the expected Jewish Messiah.

2. Do you think that this fulfilment of Old Testament promises has relevence to us today or was it purely a way to encourage the Jews of the time to convert to Christianity?

Both accounts are clear that Jesus was conceived by the Holy Spirit.

3. Would Christian faith be affected either positively or negatively by accepting that Joseph was the human father of Jesus? 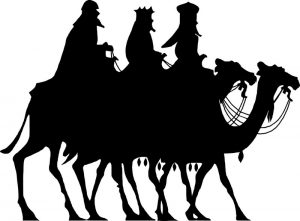 2 After Jesus was born in Bethlehem in Judea, during the time of King Herod, Magi from the east came to Jerusalem 2 and asked, “Where is the one who has been born king of the Jews? We saw his star when it rose and have come to worship him.”

3 When King Herod heard this he was disturbed, and all Jerusalem with him. 4 When he had called together all the people’s chief priests and teachers of the law, he asked them where the Messiah was to be born. 5 “In Bethlehem in Judea,” they replied, “for this is what the prophet has written:

6 “‘But you, Bethlehem, in the land of Judah,
are by no means least among the rulers of Judah;
for out of you will come a ruler
who will shepherd my people Israel.’”

7 Then Herod called the Magi secretly and found out from them the exact time the star had appeared. 8 He sent them to Bethlehem and said, “Go and search carefully for the child. As soon as you find him, report to me, so that I too may go and worship him.”

9 After they had heard the king, they went on their way, and the star they had seen when it rose went ahead of them until it stopped over the place where the child was. 10 When they saw the star, they were overjoyed. 11 On coming 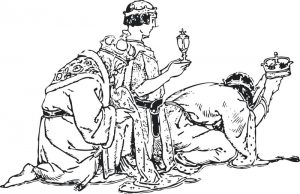 to the house, they saw the child with his mother Mary, and they bowed down and worshiped him. Then they opened their treasures and presented him with gifts of gold, frankincense and myrrh. 12 And having been warned in a dream not to go back to Herod, they returned to their country by another route.

4. Do you think that the imagery Matthew uses in this part of the Gospel has a religious value?

5. If so what does this add to the development of our understanding of the nature of Jesus?

We have, perhaps, in this age de-valued the story of the magi. We dress our children in tunics and tea towels and have them carry glittery boxes to represent the gifts. Losing sight of the implied meaning of these gifts.

6. Do you think this matters?

7. Are there ways that the “nativity play” can be used as an evangelical outreach?

Matthew emphasises that it is the Gentiles who recognised Jesus as the Christ. There are a number of parallel stories in the Gospels which draw out this lack of acceptance by the Jewish authorities and people.

8. Can you think of some other examples of this lack of acceptance by the Jews?

9. Why do you think Matthew does this in the birth narrative?

10. Do we sometimes lose sight of who Jesus really is?

In our Christmas services we often draw from the rich tradition of the Old Testament to travel from Creation through the promises made to the Prophets and spoken to the Israelites in order to prepare ourselves for the birth narrative.

11. Do you think that the Old Testament retains a relevance to us today?

12. If we no longer had the Old Testament would it diminish our understanding of who Jesus is?