James is just one of the names on the Boundary Road war memorial. I was initially unable to easily discover much about him. However, a survey of the war memorials, in St Albans, was recently completed by the Hertfordshire Historical Society. This survey identified James’ regiment as the 3rd King’s Own Royal Lancaster Regiment 6th Battalion.

With this information I have identified that he died on the 5th April 1916 at the age of 26 and is buried in the Amara War Cemetery. Iraq Ref: XIX. C. 12.

Having identified his regiment my first thoughts were what was his connection to St Albans and in particular Boundary Road Church.

His notice of death in the Lancaster Guardian provided the answers.

“Blackburn James Private 18691 Service Battalion Kings Own Royal Lancaster Regiment killed in action, Mesopatamia 5 April 1916, age 26, address 58 Wellington Road, educated at Bowerham school, apprenticed as a tailor and cutter to Mr T J Wilkinson, then worked at Kendal, Chesterfield and St Albans, he was a Sunday school teacher and lay preacher at Moor Lane Primitive Methodist church, Lancaster , unmarried. Parents Mr and Mrs Blackburn, his father has been an attendant at the Asylum for 33 years.”

What was he doing in Mesopotamia was my next question?

To summarise what I was able to find on various sites.

Thousands of Lancastrians fought their way to Baghdad in the Mesopotamian Campaign of World War I. From the three Lancashire regiments alone, no less than 1,239 lost their lives.

The 6th (Service) Battalions of the East Lancashire, South Lancashire and Loyal North Lancashire Regiments landed at Basra in March 1916. They formed part of the 38th (Lancashire) Infantry Brigade of the 13th (Western) Division of Kitchener’s New Army.

They had recently emerged from Gallipoli and initially, Mesopotamia was to prove to be no improvement on that ill-conducted campaign.

Thrown into the muddled failure to relieve a besieged British garrison at Kut, these regiments contributed over 700 casualties in five days of fighting. James was one of those casualties.

He was buried in Amara War Cemetery which contains 4,621 burials of the First World War, more than 3,000 of which were brought into the cemetery after the Armistice. 925 of the graves are unidentified.

We regret to learn that last week the sad news was received that Private James Blackburn, King’s Own Royal Lancs. Regt., and who was an acceptable local preacher, had been killed in action on April 5th. The deepest sympathy is felt for his parents,- who are members of Lancaster church and are held in high esteem.

OUR ROLL OF HONOUR.

Rev. Wilson Eccles, of Plymouth, writes —” Kindly allow me to pay a brief tribute of respect to the memory of Private Blackburn of the King’s Own Royal Lancaster Regiment, of who death on the field of battle we at Plymouth were deeply sorry to read in your columns last week. He was here for his training a year ago. He eagerly attended our Cobourg Street Church; and for about four months was a regular visitor, whom my, wife and I always welcomed at our home. He was strongly, intellectual, and even more strongly moral and spiritual. In the barrack. everybody knew him as a manly Christian. He spoke for us in open-air meetings and delighted crowds with his solo. He was good enough to say that the fellowship here was very helpful to him, and I gladly testify from his example that if our soldier-brethren will fully accept and see their opportunities in the churches with which they are temporarily connected, they can do much- gracious service. Amongst us who knew him as a soldier his memory is blessed.
. “May I also say that I greatly ‘appreciate the letter of ministers, parents and othen who every week keep me informed of young Primitive Methodist soldiers who come here? It is almost the only means the chaplain has of coming into direct touch with individuals, and I could give instances from joyous experience, beside that of Private Blackburn, of the benefit, both to the soldier, themselves and to the church, of our realising all the’communion we can.”

Another interesting thing I discovered during my research was that the regimental chaplain received the Victoria Cross during the same unsuccessful engagement.

He was with the regiment when they landed at Basra, Mesopotamia in March 1916.

Chaplain Addison appears to have been ministering to two battalions of the 38th (Lancashire) Brigade – 6th Kings Own and 6th Loyals – when, in the words of the citation to his Victoria Cross, on 9 April 1916 at Sanna-i-Yat:

“He carried a wounded man to the cover of a trench, and assisted several others to the same cover, after binding up their wounds under heavy rifle and machine gun fire

In addition to these unaided efforts, by his splendid example and utter disregard of personal danger, he encouraged the stretcher-bearers to go forward under heavy fire and collect the wounded.“

He was invested with the VC by King George V at Buckingham Palace on 3 August 1917.

As James was a local preacher it is perhaps not too long a stretch to suppose that they knew one another.

Whilst researching James I came across the details of his family grave which is in Scotforth Cemetery, Lancaster

where his parents and sisters are buried and their gravestone also bears a memorial to James.

Also on the My Metho 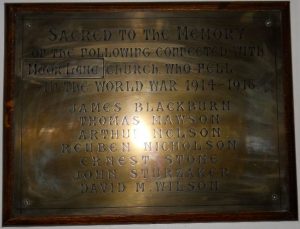 dist History site is the war memorial which was originally located in Moor Lane Primitive Methodist church but which is now in Lancaster Methodist Church this also bears James’ name.

Amara War Cemetery – Iraq
James is buried in plot XIX C 12. Row C is highlighted in red on the map of the cemetery.
The cemtery headstones were removed due to their degradation and were replaced by a memorial wall. The cemetery has not been accessed recently due to the political situation in Iraq.
Share