St Albans Sleep Out was held at again in the grounds of Oaklands College. The event was started by the Abbey and Diocese in the 1990s and has raised thousands of pounds for the local homeless charities taking part. The charities this year were: Centre 33, Emmaus, Herts Young Homeless, The living Room and Open Door.

This year Lesley, for the 10th successive year, led a small group from HRMC Boys Brigade, plus Denise as an adult helper. We were raising money for Open Door. After finding a pitch for our sleeping gear and survival bags we went indoors to listen to a speaker from Herts Young Homeless. Daniel told us how HYH had helped him find accommodation after he became homeless at 17 following the abuse he suffered at home. He now works for the charity. His inspiring story helped us to understand why Sleep Out is so important. 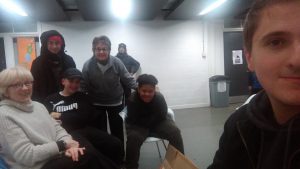 It is very humbling to sleep outdoors in the middle of winter – you feel very vulnerable and it is not very comfortable when what you are used to is a warm bed and duvet. Some of us managed a couple of hours sleep! In the morning we found our bedding was damp with dew and condensation and we realised how hard it would be if your bedding was like that every day. We could go home to breakfast and a shower in a warm house unlike many who will find themselves on the streets in all weathers this winter. Please make a donation if you can.